The extraordinary event occurred Friday, November 28, at 2:30pm, in one of the world’s richest museums, the State Hermitage in Saint Petersburg, which is celebrating it’s 250 anniversary this year.  Precisely here, Signoretto Chandeliers inaugurated with a ceremony, the seven chandeliers which the company donated to the Hermitage.  These chandeliers were created directly on the small, but famous island of Murano, located in the Veneto Lagoon a short distance from the city of Venice, where the most authentic Italian art of glass has been cultivated for centuries.

This event was organized by the Hermitage Museum, the Consulate General of Italy in Saint Petersburg, and Signoretto Chandeliers, in collaboration with Societá Italia, his distributor in Russian territories and CSI countries, Baltic countries, Ukraine and Georgia.  Director Mikhail Piotrovskij, guiding and driving the Hermitage for more than twenty years, was present and participated in this event.  In this ceremony, the works signed Signoretto Chandeliers, were officially received in this royal palace of the North.

The occasion which gave birth to this project occurred two years ago on the grounds of the Hermitage Museum, during the course of the official presentation of the Italian Friends of the Hermitage, presided by Cav. Francesco Bigazzi.  From this first meeting between the Venetian company and the celebrated institute in St. Petersburg, the conditions of this collaboration were stabilized.  In fact, the Hermitage has opened a new wing of the museum, that extends in the General Staff Building.  The six halls of this new wing will be the perfect location for installation of the seven magnificent chandeliers, exclusively created by Signoretto Chandeliers.

In order to create these works of light, the Murano company designed and proposed to the Museum a number of brand new chandelier projects, created ad hoc by designer, Omar Signoretto.  Of the dozens of proposals presented, a floral theme was selected.  The result was an installation of seven chandeliers, of which the largest has a circumference of 2.4 meters and a height of 1.7 meters, and the other six smaller works are 80cm x 80cm.  All chandelier arms are shaped like the calla lilly, the flower of beauty and eternity.

The highlight in the implementation of this project was the definition and composition of color.  It was in this way, directly commissioned by the Museum, an unprecedented shade called gray-green Ermitage.  This opera of light, created during two months of intense work, will be copyrighted by Signoretto, and the designs/drawings registered. 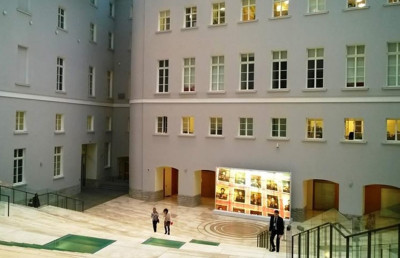 THE SIGNORETTO'S CHANDELIERS IN THEIR NATURAL ENVIRONMENT